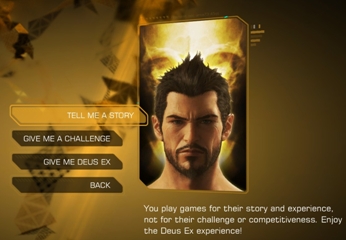 "The right choice for players who just want to sit back and enjoy the story. Combat will not pose a challenge."
— Cyberpunk 2077 sums it up
Advertisement:

Video games typically offer multiple difficulty modes to accommodate players of different skill levels, the canonical examples being Easy, Medium/Normal and Hard. However, some developers making games which place a strong emphasis on storytelling may realize that some players may be interested in the story but may not be particularly interested in the gameplay, or may find the gameplay too challenging to bother with. Hence, the developers may offer an additional difficulty level - "Story", specifically designed to accommodate players who just want to see the plot.

This can come in several different forms. Sometimes it's an Easier Than Easy mode, sometimes it strips out some of the more complex and unintuitive features from the game to offer a more streamlined experience, and sometimes it removes entire sections or game mechanics from the game altogether. On other occasions this difficulty mode is just the regular Easy mode, but specifically framed as being designed for story focus.

An occasional variant is when a game offers the ability to remove all gameplay from the game altogether, allowing the "player" to experience the story completely non-interactively; this can be done by splicing all the cutscenes from the game together to produce a feature-length film, for example. This is rarely offered as a gameplay mode in its own right and more typically as a bonus feature.

Naturally, this trope is most likely to be found in genres of game which typically place a heavy emphasis on storytelling, such as adventure or role-playing games. It could also be seen as an aversion of Easy-Mode Mockery: while some games will mock the player for opting to play the game on an easier setting, this trope appeals to the idea that different people play games for different reasons and get different experiences out of them, and for this reason an easy gameplay setting is no less valid than a harder one. Offering this mode is likewise very useful for players with disabilities that impair their ability to master the controls, or gamers who used to have nimble fingers, but lost some hand-eye coordination with age.

Note: Although easy and Easier Than Easy modes almost by their very nature will make the game easier to play and consequently easier to experience the game's story (if it has one), not every Easier Than Easy mode is an example of this trope. There has to be clear evidence (whether via in-game content to that effect, descriptions in the game's manual/other supplementary content, or Word of God) that the difficulty mode in question is being offered specifically to allow players to experience the story more easily, not simply to make the gameplay less challenging.