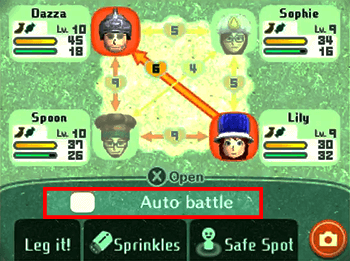 The act of taking a video game's existing interactivity away from the player, or giving the option to relinquish it.

This may seem to run counter to the entire point of video games, but the medium is not just about poking at stuff — it's about poking at fresh and interesting stuff. The player who cheerfully clicks through a lot of controls to found a moonbase will be a lot less enthusiastic about clicking through the same controls 50 times over to resupply and expand it. Once they've progressed to forging the Great Galactic Empire of Really Big Laser Guns, optimizing planetary shuttle schedules will just be a nuisance.

Automation affects the very core of the experience, so it's remarkably easy to screw up. Take away the same player's shuttlecraft once his empire discovers warp travel: he may have appreciated the break from cutthroat scheming against the Star Federation With Lots of Missiles, he may have wanted to savor the feeling of taking care of his little future people, or he may not have cared about the shuttles, yet dislike the feeling of being railroaded.

Worst of all, Artificial Stupidity is waiting for a chance to show its ugly face. The player might be winning glorious victories or building wonders to stand the best of time; it's just going to be frustrating if he has to do it by shepherding a Video Game A.I. that should know better. Still, automation is often important in keeping a game fun and challenging.

See also Anti-Frustration Features, where gameplay changes in response to the player's (lack of) skill. If the entire game is like this, it's an Idle Game or a Programming Game. Video Game Delegation Penalty is when automating gameplay function makes them less effective than humans running them. For the application of this trope to economy, see A.I.-Generated Economy.

A common type of automation is turning the combat section of a larger game over to the computer. This is convenient when revisiting previous areas, Level Grinding, or when combat on the fine scale has limited tactical depth. Good auto-battle systems have a visible and responsive "manual control" button, allowing the player to act as an overseer and intervene when necessary. Great auto-battle systems have a "WAIT WAIT WAIT TAKE THAT BACK" button. No great auto-battles are known.

Many RPGs have an auto-battle option that consists of using the default attack until told otherwise, but leaves the use of special abilities to the player.

Auto-battle's big brother, this option skips straight to the aftermath. While auto-battle is still the same battle under computer control, auto-resolve is generally calculated using a simpler mathematical model. Particularly in games that normally involve real-time physics, the result can be drastically different if the battle is instead resolved statistically.

Turning controls over to the computer. This ranges from simple orientation aids to optimization and maintenance tasks being automated to automatic travel that fast-forwards until something interesting comes up. For Driving Games, this can include not only automating gear changes (i.e. automatic transmission), but also the brakes or even steering to a certain extent (usually just enough to keep the player from going off-course). For travelling without crossing the intervening space, see Warp Whistle.

Games with a strong focus on building a complex infrastructure, such as those of the 4X genre or the construction and management simulation genre, or complicated Real-Time Strategy games, will often provide the player with the option to hand off certain menial tasks to the AI, such as exploring or building roads. The efficacy of this varies greatly between games and the nature of the task; sometimes, the AI will simply be programmed to perform the task randomly if the player would have been unable to do it much better, and other times the results will depend on the in-game attributes of the "governor" assigned.