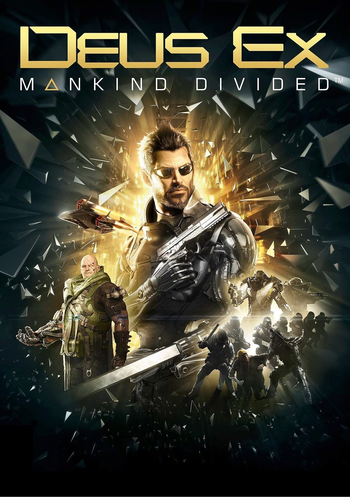 I once thought I could save the world. Now look at it.
"There will come a time, when we will all have to choose a side."
— Viktor Marchenko
Advertisement:

Deus Ex: Mankind Divided, released in August 2016, is the direct sequel to Deus Ex: Human Revolution, the fourth main installment in the Deus Ex Universe and the first to feature the same Player Character as the previous game. It was developed by Eidos Montreal for the PlayStation 4, Xbox One, and PC.

At the end of Human Revolution, Cyborg private security officer Adam Jensen failed to prevent a shadowy organization from causing every Transhuman on the planet to go into a fight-or-flight response and attack anyone near them. This event led to the deaths of more than 50 million people and caused humanity to turn against those with augmentations, beginning a dark age for human technology and culture.

Two years later, in 2029, Jensen has joined forces with an Interpol-funded task force aiming to hunt down and capture augmented terrorists in a world that now hates and fears transhumans because of his mistakes.

A standalone DLC, System Rift was released in September 2016 in which Jensen works with Frank Pritchard of the previous game. A second standalone story DLC, A Criminal Past, was released on February 23rd, 2017, and is a prequel mission that follows Adam during one of his first missions for TF29. A third DLC mission, Desperate Measures, was initially released as a preorder bonus and later available as a free download. Unlike the other two DLC missions, it ties directly into the plot of the main game, with Jensen pursuing a new lead in the train station bombing investigation.

Two standalone titles related to Mankind Divided were released on January 24th, 2017 — a free-to-play version of the Breach multiplayer mode, and Deus Ex: Mankind Divided - The VR Experience, which allows players to visit four locations from the game if they have a VR headset.

A macOS and Linux port was also confirmed by developer Feral Interactive a mere week after the Windows launch. The Linux version was released on November 3rd, 2016, and the macOS port was released over a year later on December 12th, 2017.

Many things about Mankind Divided's plot overtly pointed towards the game being intended as the second entry in a trilogy, and many member of its development team had for a time listed working on a game project codenamed "MD2" on their various online work profiles. The vast majority of said developers have, however, since quit Eidos Montreal and moved on to other studios and projects, strongly indicating that the third installment has been Quietly Cancelled.