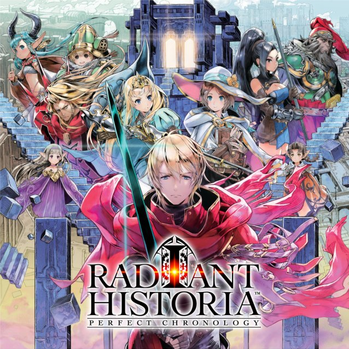 If you could rewrite history... What would you do differently?
Advertisement:

In the world of Vainqueur, a land of men and beastmen, the theocratic nation Alistel is in a state of war with the fascist monarchy of Granorg. Vainqueur's land is slowly dying alongside its people, as the world slowly turns to desert and an unusual disease known as the "Sand Plague" turns its citizens into sand. The ruler of Alistel directly blames this disease on the queen of Granorg, Protea, meaning they are justified in a holy war.

Enter our hero, Stocke, an Alistelian agent working for the Special Intelligence division. He is sent alongside new teammates Raynie and Marco to meet and escort a spy who has important information that could turn the tide of the war. Unfortunately, the lot of them find themselves surrounded; the spy, Raynie, and Marco bite the dust; and Stocke is heavily wounded. He finds himself in Historia, a world between time and space. It is there that a pair of children give him the ability to travel through time, space, and the timelines, telling him that the world needs his new power. Going back and rescuing his team from their fate, Stocke must now cross between two timelines — one where he remains a spy, one where he joins his friend Rosch in the army — to guide history down the "razor-thin path" that leads to salvation.

An Updated Re-release for the Nintendo 3DS, Radiant Historia: Perfect Chronology, was announced in late March 2017, and released in February 2018. The remake contains some new content such as a Bonus Dungeon, an expanded postgame, updated artwork, and full voice acting. DLC can also be purchased.