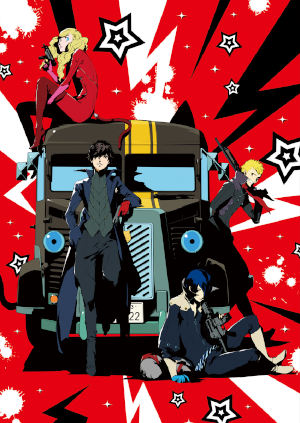 Looking cool.note From left to right: Ann, the Protagonist, Yusuke and Ryuji. At the back is Morgana in his van form.
Advertisement:

An anime special tying in with the release of Persona 5. It is a stand-alone episode that showcases the Phantom Thieves of Hearts performing a "routine" caper.

It comes bundled with a 41-minute Audio Play titled The Night Breakers including additional scenes with the Phantom Thieves and the outsider perspective of Makoto, Futaba, and Haru about the events of the OVA.

The show was created by Atlus and produced by A-1 Pictures. It will see a DVD and Blu-ray release in Japan. Overseas, the show's been licensed by Crunchyroll.

This anime special contains examples of: