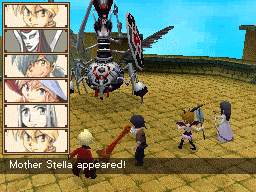 So the next six turns are The Hero, Boss, The Lancer, Black Magician Girl, White Magician Girl, and The Hero again.note The initiative queue is actually displayed on the bottom screen in this game, but it was changed for ease of illustration.
"An incredibly convenient meter at the top right tells you when everyone in the combat will go in turn."
— The Spoony Experiment reviewing Final Fantasy X
Advertisement:

When the turn order in a video game, usually strategy or RPG, is shown in a way that tells the player the next several turns of (usually) everyone involved in a battle or challenge. The form is usually a stack or line of headshots of the characters and enemies.

Thus if Alice and Bob are at the first and second positions respectively, and the Blob Monster they are fighting is third, then Alice will get the first move, Bob will get the second, and the blob will go third.

This can have a number of effects:

Some games, at certain times, will even let you preview how turn order will be changed. Say if you select an action, but have not confirmed it, the queue will change order to show what will happen.

These can involve various amounts of Real-Time with Pause.

A Sub-Trope of Action Initiative.