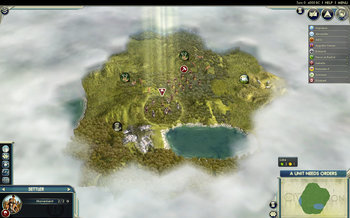 I don't understand why it is always so overcast in this game.
You glance through the mist obscuring the battlefield (there always seems to be mist on a battlefield — some say it's to obscure the parts that haven't finished loading yet, but you don't know what that means).
— Kingdom of Loathing
Advertisement:

The expression, not to be confused with the 2003 war documentary about Robert S. MacNamara, The Fog of War.

A feature of many Strategy Games that keeps the player from seeing everything that happens on the game map by limiting their knowledge of "enemy" units and movements to those areas where they have (or have recently had) units of their own. Some games enhance the effect by having a "partial" fog over areas that the player's explored at least once, but without any units in range at the time to observe.

While this is a realistic limitation, many players find it irritating and restrictive, often because the AI driving the other side is usually not likewise handicapped. Turning off the fog of war is thus one of the more popular Cheat Codes a game could have, or for that matter it can easily be an option to turn it off without any kind of cheat code.

This exists in Real Life, in the sense that you need to have someone or some sensor observing the enemy in order to actually know their whereabouts. However, generally when someone talks about the fog of war they mean the sense of confusion created in one's mind when subjected to the chaos of combat. Usually they're talking about commanders making or trying to make decisions while sorting through the morass of time — late, conflicting, and rushed reports with limited time in which to act. The stress of getting shot at doesn't help. To quote an old saying: "Order, counter-order, disorder."

A Sub-Trope of Weather of War, see also Defog of War on abilities and items that help lessen this.

Non Video Game applications of this trope include: