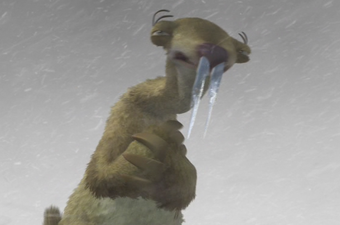 "Look! I can freeze my drool!"
— Pinky, Wakko's Wish
Advertisement:

There are all kinds of climates in this world, whether they are hot, humid, windy, or freezing cold. In the case of that last one, the temperatures there can range from nippy, to freeze-your-nuts-off, to almost sub-zero. You want to pack warm if you don't want to suffer hypothermia, which is not a pleasant way to die.

One indicator of how ridiculously cold a place is is when your own body fluids wind up freezing mid stream when expelled. The most common ones being snot, tears, and urine, but on rare occasions can be things like blood and vomit. Whatever it is, expect it to go from liquids to ice cubes or fixtures within a matter of seconds.

Usually Played for Laughs. May also be a form of Toilet Humour if it's urine or vomit. Overlaps with Nature Tinkling if the character is peeing outdoors and it happens, and Nose Nuggets and Freeze Sneeze if it's snot.

Not to be confused with the expression "[his/her/my] blood froze", a metaphor for an Oh, Crap! realization with heavy overtones of fear.