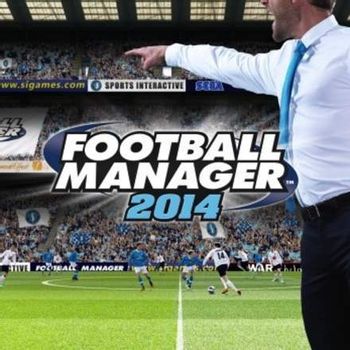 Football Manager: because the guy in suit is always the one that matters.
Football Manager, formerly known in the USA and Canada as Worldwide Soccer Manager, is a football management sim where, unlike games such as the FIFA and Pro Evolution Soccer'' series, you run the tactical & club management aspects rather than actually controlling the players on the pitch. It's up to the player to buy and sell players, control the finances, tactics and setup of the team as a whole.
Advertisement:

The series began as the hugely successful Championship Manager series of the 90's and early 2000's. In 2004 developer Sports Interactive left the Eidos publishing stable while retaining everything from Championship Manager but the name. This lead to the release of Football Manager 2005, with subsequent yearly releases and various spin-offs into console & handheld markets. The built from scratch, heavily delayed Eidos funded Championship Manager 5 was widely panned, however the series limped on until the series final release in 2010.

Part of the game's success is due to the fact that almost any real life player can be loaded into the game, no matter how unaccomplished, within an extremely deep structure that involves multiple tiers of leagues from across the planet. It also has widespread editing support allowing people to create leagues & player sets even deeper than the game itself is built with. It is also quite simple to edit in new graphics, logos, player faces to increase immersion.

The games composing the FM series began with Football Manager 2005, which covered the 2004/05 European Football Season and so on up to the most recent release. They all ultimately have roots in the Ur-Example, 1982's Football Manager on the ZX Spectrum.

The games have examples of the following tropes