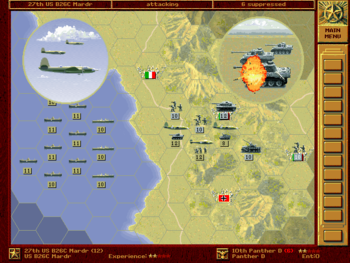 Panzer General is an operational-level Turn-Based Strategy game published by Strategic Simulations, Inc. It's one of the classic games of the genre and the flagship title of SSI's Five Star General franchise, which also includes Allied General, People's General, Fantasy General and Star General.
Advertisement:

In the game, you take control of the forces of Nazi Germany during World War II. Battles take place on a hexagonal map; the entire map is visible at the start, but there is a Fog of War which hides enemy units outside the player's vision. The objective of each map is to take and hold certain key cities within the time limit; whether and how quickly the player does this determines how well he does, which on certain maps can unlock ahistorical campaign options. The ultimate goal of the original game is to invade the United States and conquer Washington, D.C.

The game is a computer version of a classic Tabletop Wargame, of the sort not repeated much since.