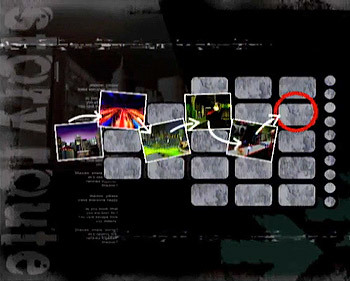 326 possible paths. 10 endings. None of them canon.
Advertisement:

Although Adventure and Role Playing Games are frequently built on plotlines that progress in only one scripted direction, sometimes a video game developer offers the player a choice about which direction a given segment may proceed, by offering multiple paths that run parallel to each other. Branching plotlines are usually most common in Visual Novels, followed by adventures and RPGs.

Story Branching occurs when the players' choices determine which levels, objectives, and other choices they will face later in the game and which will be lost for good (at least, in the current playthrough). This makes them distinct from optional Side Quests, which do not so much drive the central plot forwards as detract you sideways (though particularly long side-quests can feature story branching of their own); and from Plot Coupons, which you can often collect in any order — but the overall plot only progresses once you have all of them. A chart of the various branched levels and objectives is commonly referred to as a Campaign Tree. For a more in-depth look, refer to Analysis.Story Branching.

It may fall into Story Branch Favoritism if one of the branches receives more focus from the creator than the others. Subtropes include Multiple Endings (where plot branches occur at the finale, or just prior to endgame, leading to different denouements), Multiple Game Openings (where the story starts along a branch), Big First Choice (where the story has a major split after a warm-up period), Multiple-Choice Past (when the history of a character can vary), Secret Level (where the plot gains an additional episode under certain conditions), and Algorithmic Story Branching (where the branching is based on numeric calculations, rather than binary choices). Compare and contrast Gamebooks, the manner in which branching plotlines appear in other media, and Static Role, Exchangeable Character, where the story remains mostly linear, but extremely variable thanks to letting the player assign different actors to different key roles in it.

In games with competitive elements, such as a timer or Scoring Points, this trope quickly falls apart, as there will often be an optimal scoring path that players must choose in order to obtain the best scores.

Compare/contrast Emergent Narrative. The amount of Story Branching determines the degree of plot (non-)linearity. See Sliding Scale of Linearity vs. Openness for the possible degrees of exploration (non-)linearity, and Combat, Diplomacy, Stealth for a way to introduce gameplay non-linearity. See also Story-to-Gameplay Ratio.

Route Boss is a subtrope, where in certain boss battles are only available on certain story branches. Compare Choice-and-Consequence System.