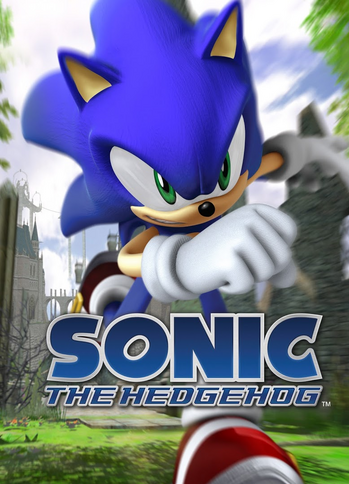 If you're looking for the original 1991 Genesis game, go here.

The One with... Sonic rescuing a princess from Dr. Eggman, Shadow fighting a conniving Doppelgänger, Silver fighting a raging fire demon, and Time Travel. Also glitches. Lots and lots of glitches. And Loading.

Sonic the Hedgehog, commonly referred to as Sonic (2006) or simply Sonic '06 to differentiate it from the series and its first game, was released at the end of that year for the Xbox 360 and PlayStation 3. Made to commemorate the 15th anniversary of the titular franchise, expectations for the game were quite high. Unfortunately, the one-two punch of an already Troubled Production chafing under an attempt to reach the anniversary deadline meant that what was eventually released colossally failed to live up to them. The stress of the production convinced series co-creator Yuji Naka and his strung-out staff at Sonic Team to ditch Sega and go indie.

Dr. Eggman is at it again, trying to kidnap the Princess of Soleanna and combine her mystical power with the (you guessed it) seven Chaos Emeralds so he can rule over all space and time. Sonic the Hedgehog once again stumbles onto one of Eggman's plots during his travels. Meanwhile, a telekinetic hedgehog from the future named Silver appears on the scene. His goal is to prevent his Bad Future from coming to pass by destroying "The Iblis Trigger", which he mistakenly believes to be Sonic. A third character, series anti-hero Shadow, must contend with his mysterious Doppelgänger "Mephiles the Dark" who seeks to activate the Iblis Trigger and plunge the future into despair.

Mephiles's polite words and demeanor when speaking to Rouge and Shadow can't hide the sinister, sadistic maniac he really is.

Mephiles's polite words and demeanor when speaking to Rouge and Shadow can't hide the sinister, sadistic maniac he really is.