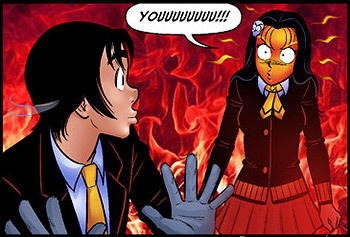 No! Someone else!
"That is all I get? One pronoun?"
— The Sorrow, The Last Days of FOXHOUND
Advertisement:

The You! Exclamation is the classic expression of surprise and/or anger upon sighting another character, usually a nemesis.

As several of these examples are clearly aware, this is kind of pointless for any reason besides that the extreme emotion the sight evokes needs some word to give it form, and as it is directed towards that character, the second-person pronoun is the only obvious choice. Sometimes, the person being addressed will respond with "Who else?" or "In the flesh" or some variation.

In Japanese media, it can get more complicated: many words in Japanese directly translate to "you," and depending on the word used, "you!" can connote anything from "hey, there" to "You Killed My Father, Prepare to Die," to anything in between. Pragmatic dubbers tend to use the connotation instead of the literal translation.

In murder mysteries, "You!?" or a variation thereof is often last words; see Death by Recognition. The killer's identity may be hidden from the audience with a Murderer P.O.V..

When both parties have this reaction to seeing each other, it's "You!" Squared. Also compare Say My Name. See also No, You.

You! read these examples:

We really appreciate you.

UF!Sans, upon breaking free from Cross' mind control and realizing what happened, immediately exclaims this trope. The "You" is so big it has no dialogue box.

UF!Sans, upon breaking free from Cross' mind control and realizing what happened, immediately exclaims this trope. The "You" is so big it has no dialogue box.