In General
The Oni are hideous horned demons from Japanese folklore. 10 of them (led by Tarakudo) commanded an army of Shadowkhan, who are demonic shadow warriors.
Tarakudo

This face will stare at you from the SHADOWS!
Click here to see spoilers 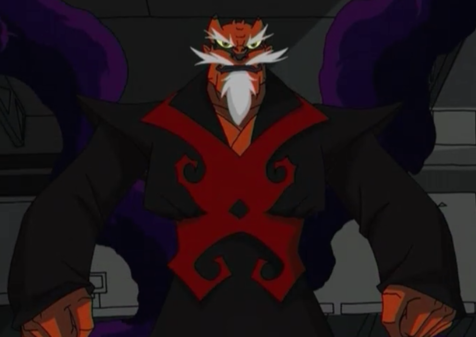 I am the one and only King of the Shadowkhan!
Voiced by: Miguel Ferrer

The main villain of Season 4. He is the king of the Shadowkhan and lord of all Oni. He seeks to release his nine Oni Generals and their Shadowkhan armies to take over the world. 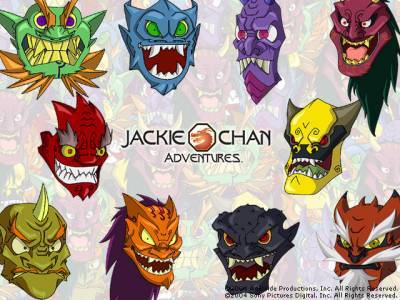 Yep, even the leader deserves to have a spot.
Click here to see them in their physical forms

The 9 Oni who served Tarakudo as the commanders of the 9 sections of his Shadowkhan army. Each of them has been trapped inside a mask. Any mortal who wears an Oni Mask will be possessed, and can summon a unique type of Shadowkhan. 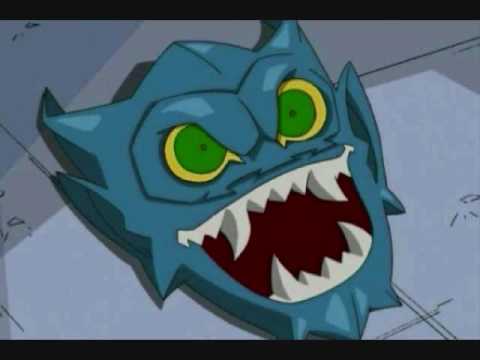 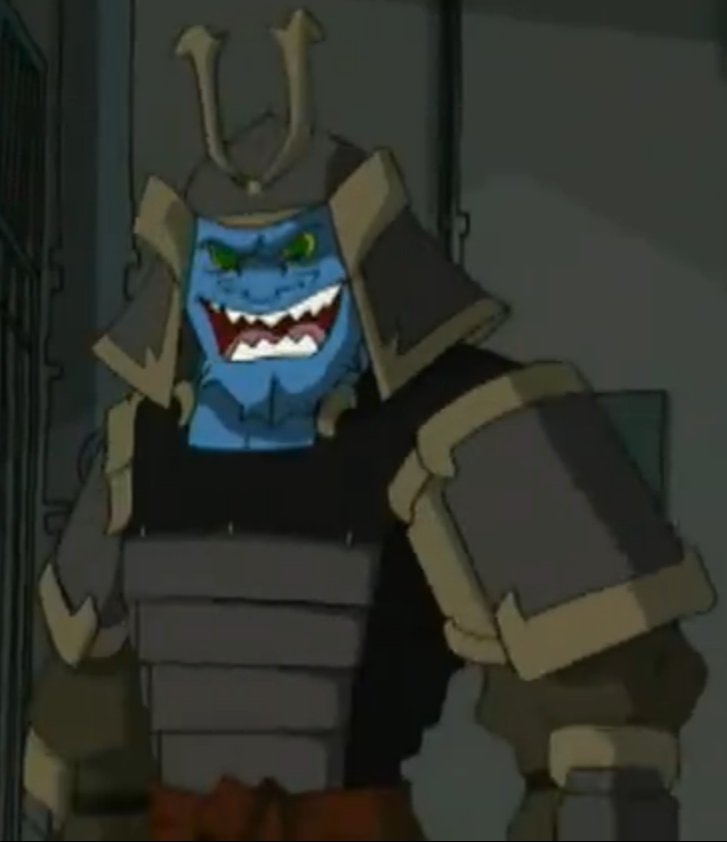 The only Oni General who is named. He is the second-in-command behind Tarakudo. He can summon Samurai Khan. 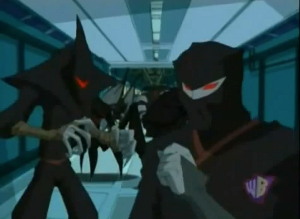 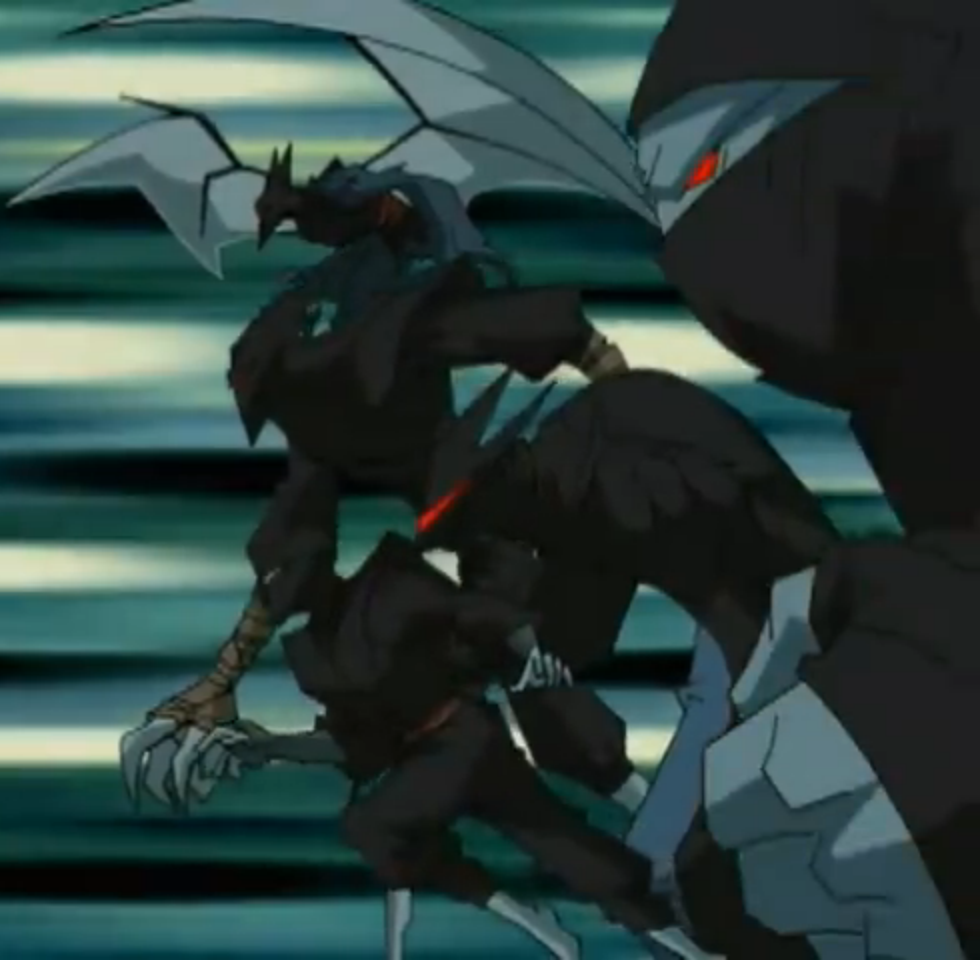 Demonic shadow spirits. They were introduced as ninjas who served Shendu, and briefly Jade. In Season 4, we learn that their original masters were the Oni, and there are 9 different varieties of them.
Ninja Khan 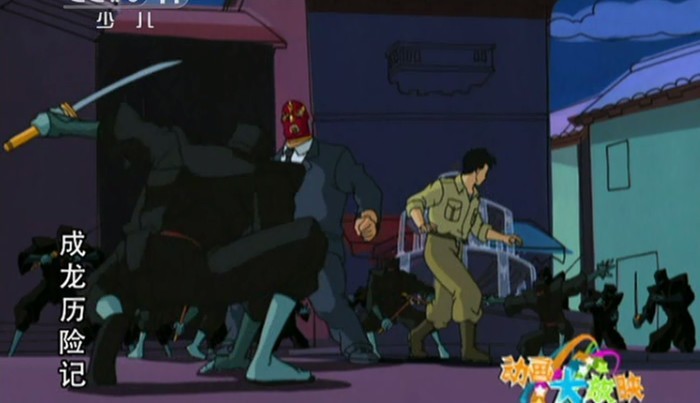 The most common kind of Shadowkhan, and the only type seen until Season 4. They have been summoned by Shendu and Daolon Wong (through sorcery), Jade and Tohru (with the Mark of Tarakudo), and Chow (with an Oni Mask).
Razor Khan 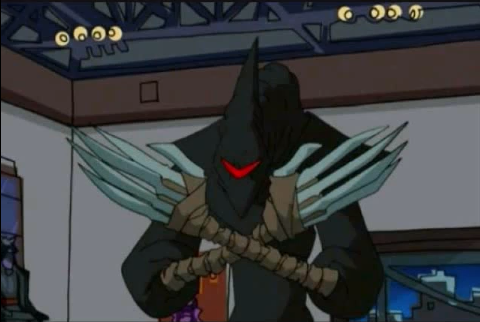 These Shadowkhan attack with sharp blade-like claws. They are summoned by Ratso with an Oni Mask.
Bat Khan 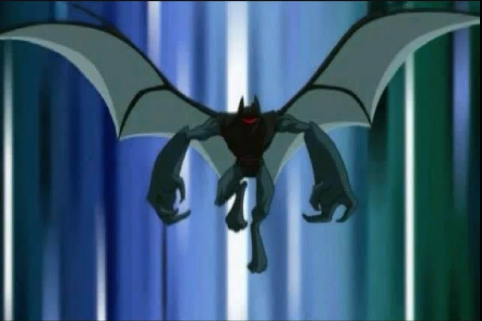 Flying Shadowkhan. They are summoned by Scruffy the dog, who somehow got an Oni Mask on his face. 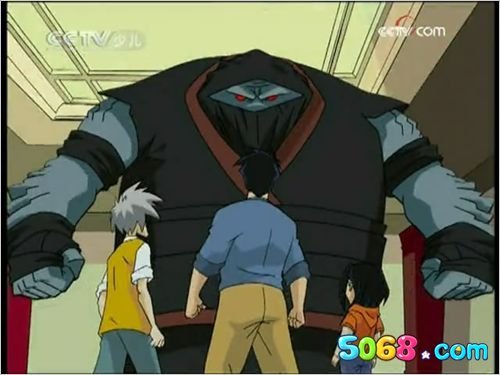 Large and strong Shadowkhan. They are summoned by Captain Black with an Oni Mask.
Samurai Khan 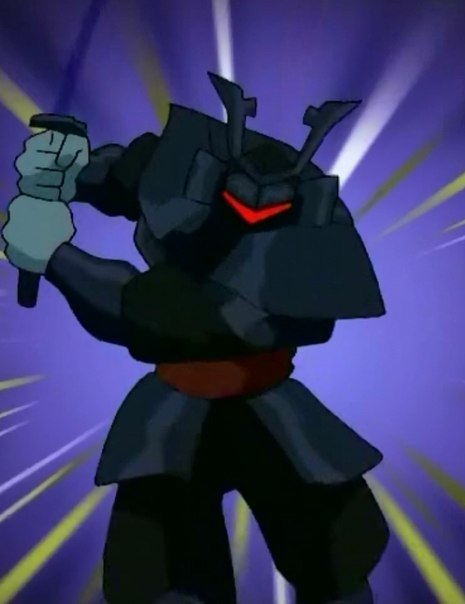 Ikazuki's henchmen, who are Exactly What It Says on the Tin. They are summoned by the reanimated Ikazuki Mask, while he was placed on Finn's butt.
Squid Khan

Slimy tentacled monsters who can "stretch like taffy". They are summoned by Paco with an Oni Mask.
Crab Khan 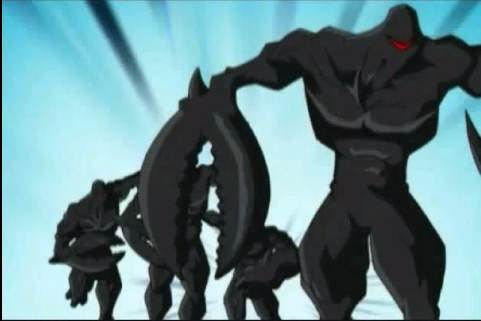 They have large crab-like pincers in their right arms, and large scorpion-like stabbing claws in their left arms. They were temporarily split in half, because their Oni Mask was also split in half. They're summoned by Valmont and Jade with the two halves of the mask.
Leech Khan 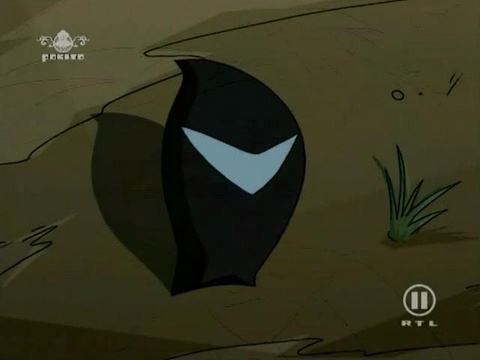 They start out very small and pathetic, but they grow larger every time they eat a human's shadow (which incapacitates the victim). They are summoned by Hak Foo with an Oni Mask.
Mantis Khan 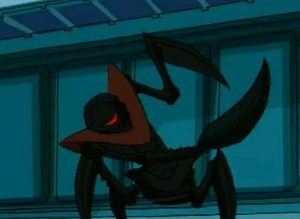 Four-legged creatures with blade-like arms. Nobody gets to wear their Oni Mask, but they appear briefly after their Oni General is freed.