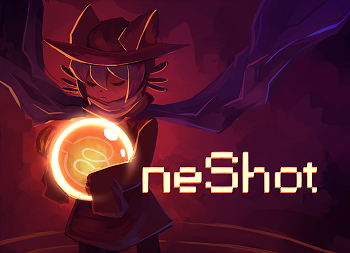 [You're already too late]
[The world isn't worth saving anymore.]
This place was never worth saving.
...Do you still want to try?
Then, remember this:
Your actions here will affect Niko.
Your "mission" is to help Niko leave.
And most importantly...
(a pop-up appears on your computer) You only have one shot, [YOUR_NAME].
Advertisement:

OneShot is an RPG Maker 2014 Puzzle/Adventure game where you, the player, must guide a lost child through a strange world, utilizing items, characters, and the environment to progress. The game was created by Eliza Velasquez and NightMargin (Casey Gu) and was entered in the 2014 Indie Game Maker Contest. An Updated Re-release made using RPG Maker XP was released on Steam on December 8, 2016, followed by a large content update on March 26th, 2017.

. The Updated Re-release can be found on Steam

Both of the major game developers have Tumblr accounts, with Night's here

The game is not related to One Chance, but the concept is very similar. Nor is it related to the film of the same name, which concepts are not similar at all.

open/close all folders
General
The original 2014 version
Advertisement:
The 2016 rerelease

You only get one shot, do not miss your chance to blow
This opportunity comes once in a lifetime, yo