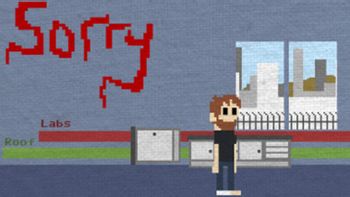 The world will end within six days. How will you spend your last moments on Earth?
In 6 days, every living cell on Earth will be dead.
You have one chance.
Advertisement:

One Chance is an Adobe Flash game that was originally released

in December, 2010. It uses a Second Generation

style graphics scheme and the gameplay consists of walking forward and making a few simple choices.

The player is a scientist, whose team found a supposed cure for cancer; unfortunately, it happens to be a pathogen that travels through air. Now, he, and everyone else, has only six days to live unless he manages to reverse his error within that time. Moreover, the game cannot be replayed, so the title is very much literal.

To crib the author's notes:

"One Chance is a game about choices and dealing with them."

"Scientist John Pilgrim and his team have accidentally created a pathogen that is killing all living cells on Earth."

"In the last 6 remaining in-game days on Earth, the player must make choices about how to spend his last moments. Will he spend time with his family, work on a cure or go nuts?"

"You only have ONE CHANCE to save the world. One. Uno. 1. And you bastards will have to pry this game out of my cold dead hands before I put a replay feature in."

The game is not related to One Shot, but the concept behind the game is very similar. Also not to be confused with the film of the same name, a biopic of Britain's Got Talent winner Paul Potts starring James Corden.