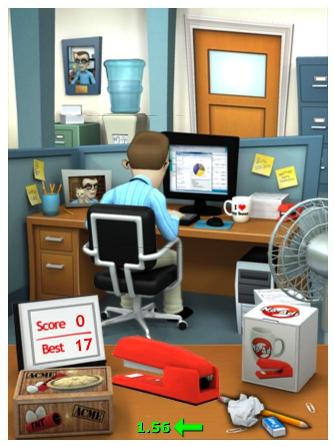 Office Jerk is a Casual Video Game made by Fluik Entertainment for the iPhone and Android. The entire premise of the game involves pelting the titular Jerk with various objects as he's sitting at his desk trying to work. A fan moves from one side of the screen to the other and changes speeds (noted at the bottom of the screen), influencing how what you throw flies. You can also hit objects in the background like the picture of the Jerk or the window in the office door. As you land hits, you earn points which vary depending on what you hit; if you miss, the score resets to 0 and you have to start over again.

A companion game, Office Zombie, is exactly the same game, but with a horror-themed twist to the character, environment, and objects. A Christmas edition of Jerk was released in 2011, and a Summer Olympics-themed version was released in 2012.

These games provide examples of the following: