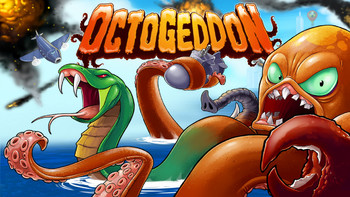 Octogeddon is a 2018 indie game published by All Yes Good. It was developed by George Fan, of Insaniquarium and Plants vs. Zombies fame.

The game opens with an mutant octopus named Octogeddon casually watching videos on the Internet from its undersea grotto. It comes across a cooking video during which, to its horror, the cook prepares an octopus-based dish. This sets off Octogeddon's Hair-Trigger Temper, and the cephalopod decides to retaliate by destroying the Statue of the Liberty in New York City. It then begins its quest for vengeance and destruction.

The game has elements of a Shoot 'em Up, but has its own unique quirks as well: the player controls the titular Octogeddon and must defeat hordes of enemies by attacking them with its tentacles. Soon, the player will unlock DNA from various animal species, which can replace a single tentacle with parts of other animals like snakes, crabs or roosters. Each of these animals have unique properties: snakes can shoot poison around, crab claws deal huge damage to close opponents, etc. The player can select several tentacle options at the start of each levels. After the end of each chapter, Octogeddon will also find a new animal buddy which can accompany it on its quest but won't take a tentacle spot.

The game borrows several elements from Fan's previous works Insaniquarium and Plants Vs Zombies, most notably the gain of new items at the end of most of the levels which can be selected for use in the later levels of the game. Octogeddon also shares its art designer with Plants Vs Zombies, and as such, the graphics of the two games are very similar.

This game provides examples of!: