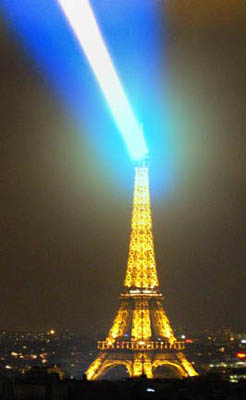 What's even cooler than a Monumental Battle? When said monument takes part in it.

A sister to Landmarking the Hidden Base, this trope takes the view that the only thing cooler than placing a covert headquarters inside a world-famous monument is placing a mountain-cracking Weapon of Mass Destruction inside a world-famous monument. Merely housing personnel, labs, or arms isn't good enough; at a minimum, the superweapon should be hidden inside the landmark, while a sign of true genius is making the landmark the weapon itself. Nerdgasm levels double if the landmark transforms into a mobile battle platform or Humongous Mecha.

◊ is a popular subject for this trope; apparently, the idea of Giant Stone Abe getting off his ass and kicking someone else's has some appeal…

If the landmark is sufficiently old, this could end up as a Lost Superweapon. If the opposition ever discovers the location (or even existence) of the weapon, Monumental Damage or a Monumental Battle are all but assured.

Note: This trope covers weapons in real-world landmarks. Weaponizing fictional buildings or installations is almost a prerequisite in some works.