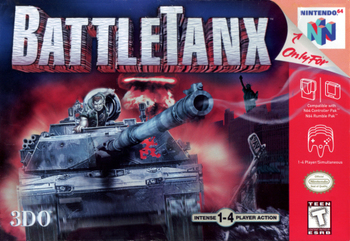 2001 A.D. — The world as you know it is no more. A deadly virus has wiped out 99% of the female population and the few surviving women are now worshiped as QueenLords. You are Griffin Spade, warrior and Battlelord in a post-apocalyptic future. With only the BattleTanx at your command, you must save mankind from extinction! Fight your way across the wasteland that was once America and rescue the QueenLords from roving gangs of mercenaries and thugs.
— The game's box, and a fair summation of the first game.
Advertisement:

BattleTanx is a 1998 game for the Nintendo 64 by The 3DO Company, which was followed a year later by a sequel that also appeared on the PlayStation. The premise is simple: a plague has killed nearly every woman on the planet, forcing the worlds' governments to cloister the surviving females away in heavily-fortified quarantine zones. In the mayhem, a nuclear war was sparked, reducing much of the Earth to rubble and leaving the survivors to fight over the species' few females, who are now worshipped as "QueenLords". For reasons unexplained (save by the Rule of Cool), all of these tribes of brigands and freaks managed to get their hands on tanks. Lots and lots of tanks.

In the original BattleTanx, the player controls Griffin Spade, a tough guy from Queens whose fiancee Madison is one of those taken by the U.S. Government to a secure facility. After surviving the apocalypse, and armed only with an M1A1 Abrams, Griffin begins a mechanized trek across the remains of the United States, blazing westward through Chicago, Las Vegas, and finally San Francisco, crushing rival gangs, rescuing other captured women, and forging his own army in his search for Madison. The two are finally reunited when Griffin storms the Quarantine Zone on Alcatraz Island, incidentally leaving them in command of the most sizable and least malevolent faction in the former United States. A port for Game Boy Color was released in 2000, which featured the storyline and gangs of the first game, but with music taken from the second.

The sequel, BattleTanx: Global Assault, is set five years later and involves a rival QueenLord named Cassandra who has taken an unhealthy interest in Madison and Griffin's son Brandon. Using her mind-controlling powers to turn Griffin's army against him, Cassandra kidnaps Brandon and flees across the country, two angry tank-driving parents in hot pursuit. The chase ultimately leads through Great Britain, France, Germany, and back to Alcatraz. Along the way we learn that Cassandra was the one who unleashed the woman-killing plague as a way to wipe out those women lacking the psychic "Edge," and ends with the seemingly-killed villainess being revived by a mysterious magician who mentions a "chosen one."

And after that, nothing. 3DO had already been in decline when the BattleTanx series came out, and went bankrupt in 2003. Still, the BattleTanx games are fondly remembered: the story was simplistic, the graphics basic, but the gameplay was solid and conveyed the visceral joy of grinding the ruins of Western civilization under your armored treads as you stalked your opponents like steel-skinned predators.