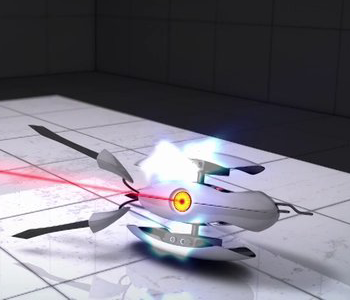 Please put me back up!
Advertisement:

Technological progress is a strange thing, and even more so in Video Games. Often, the enemy weapon manufacters can design a fully-automatic gun that basically never runs out of ammo with ease. Yet, it can never be designed in such a way that someone can't destroy it or knock it down fairly easily. If this trope is in play, game designers will usually put them in hard-to-reach places or at the end of long corridors so that the challenge is getting to them; once you're in close, actually defeating them is trivial. Sometimes one hit is all that's needed. Most frequently seen in FPS games.