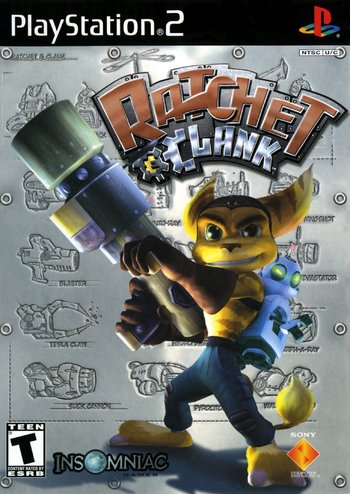 It's time to rip the galaxy a new one.
Ratchet: You got a name?
Clank: My serial number is B54296- (clanks against the side of the spaceship as it rickets)
Ratchet: I'll just call you... Clank for short! Hang on!
Advertisement:

The first game in the Ratchet & Clank series, and a modest hit for the PlayStation 2.

Ratchet is a young mechanic on the planet Veldin who's built his own ship to travel to new planets, but he can't actually use it without a robotic ignition system. But things change when he finds a small robot he later names Clank, who escaped from a robot factory and crash-landed on Veldin. Clank brings bad news: he's learned that Chairman Drek and the Blarg plan to destroy planets across the galaxy in order to build themselves a new homeworld to replace their polluted old one. In exchange for a chance to see the galaxy via Clank's robotic ignition system, Ratchet decides to help Clank look for the great hero, Captain Qwark, and get him to stop Drek's plot.

A re-imagining of this game has been released, complete with updated gameplay, and it ties into the film of the same name.

The tropes on this page are hosed!

Example of:
Disney School of Acting and Mime