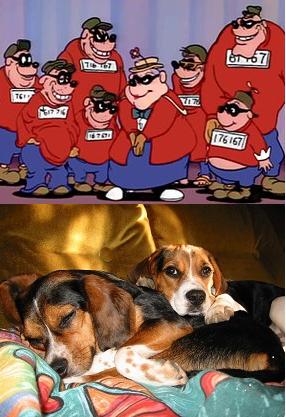 The Beagle Boys, and real beagles...
not seeing it.
"And the only thing that makes him a cricket is because we call him one."
— Animator Ward Kimball on the character design of Jiminy Cricket
Advertisement:

Sometimes, whether due to a specific visual style or use of anthropomorphism, a character who belongs to a clearly-identified Real Life species ends up looking nothing like what said species actually does.

Some examples are understandable and forgivable, especially if they are also an example of Seldom-Seen Species, but for the most part Tropes Are Tools and so is making a character look less like their real world species counterpart due to The Law of Conservation of Detail, being able to tell a story easier (as Most Writers Are Human) and sometimes simply because it looks cool and/or fun. See also Viewer Species Confusion for a subtrope based on the audience's reaction to a creature, and I Am Not Weasel for in-universe reactions.

While this primarily applies to animal characters, it can also apply to anthropomorphic objects.

Related to the Cartoon Creature (whose actual species is entirely ambiguous) and Call a Smeerp a "Rabbit" (which is about the name of their species, and not the species itself).

Many older examples of Seldom-Seen Species look and act very little (if anything) like their Real Life equivalents.

NOTE: This trope is NOT "animal has qualities that differ from their real counterparts" (which would be the Downplayed section of the Playing With tab) note Egregious examples of this may go in Artistic License – Biology or Funny Animal Anatomy, this trope is "animal mainly does not look like their general species". As a rule of thumb, ask yourself if you could recognize the animal's correct species without being told (hence the name, Informed Species)note If you're familiar with what the real animal looks like, obviously. If not, then this is the correct trope. Also, keep MST3K Mantra in mind and only point out details that are mostly obvious and that the general audience would notice, not minor, nitpicky ones only zoologists would care about.