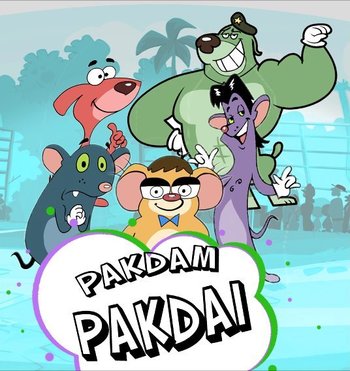 Pakdam Pakdai, also internationally known as Rat-a-Tat, is an Indian Slapstick cartoon. It stars Don (Doggy Don), who has his days being ruined constantly by three mice in his house: the self-proclaimed and the most annoying and vicious leader Charly (Chhotu), followed by the ever-hungry Big Eater Marly (Motu) and the least responsible joker Larry (Lambu)—so he attempts to get his revenge on them (and is sometimes helped by his brother, Colonel), but to no success. There's also a grumpy bulldog named Rox, who will beat up anyone that accidentally breaks his precious things, or even his entire house.

It first premiered in April 2013, and has a total of 78 episodes and 2 movies. Being an "official Indian adaptation" of Oggy and the Cockroaches as confirmed by Word of God, it was also created after Nickelodeon India lost the rights to air Oggy in 2012.