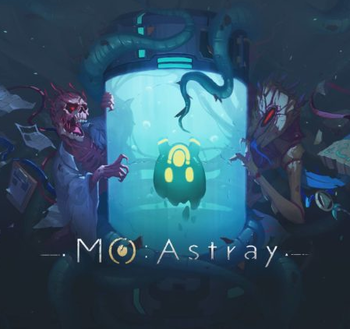 MO: Astray is a Puzzle Platformer, developed by a Taiwanese developer Archplay and published by Rayark. It was released for PC through Steam on October 25th, 2019, with a Nintendo Switch version planned in the near future.

There, you play as a slime, which initially has no name, but eventually gets named MO by the narrator: a mysterious female voice that inhabits MO's mind. You need to make your way through a futuristic facility that must have been cutting edge, but has fallen into disrepair long ago, being overrun by both horrific mutants and primitive humanoids referred to as inhabitants. As you go through the game, you collect memory fragments of the voice, which fills in the backstory of the disastrous experiments that led to the current situation.

Compare to Gish by Edmund McMillen.