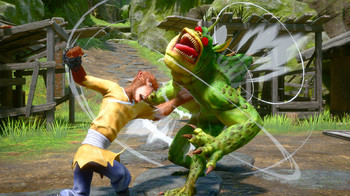 Monkey King: Hero is Back is a 3D Beat 'em Up game by HEXADRIVE and Oasis Games, based on the 2015 Chinese animated film film of the name, which was itself based on the legendary Journey to the West. It was released on October 17th, 2019 for PS4 and for PC through Steam.

This adaptation pits the Great Sage himself, Sun Wukong, newly freed after 500 years of imprisonment, with Liuer, a young boy who looks up to the Monkey King in a journey that brings them close together.

Monkey King: Hero Is Back provides examples of: