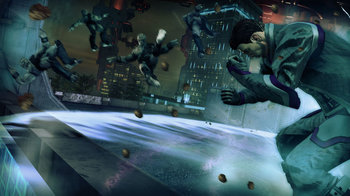 An attack typically used by heavy characters in video games, the Shockwave Stomp is where a character smashes the ground hard enough to send out a wave of energy that causes damage to their enemies.

While often the side effect of the Ground Pound it can be done in various ways, using your fists, or striking the ground with a hammer (or any other weapon for that matter), stomping or just by concentrating really hard. The attack is most likely to be seen as a coloured wave but sometimes you'll see the ground itself bubble over like somebody flipping a carpet.

The goal of the slam effect is usually to create distance between you and the opponent or to follow up with an attack which requires a charge-up time to perform while you are knocked down/back, or used by a Mighty Glacier to counter a Fragile Speedster. The nastier video games can have the shockwave instantly kill you for failing to see it coming and moving out of the way.