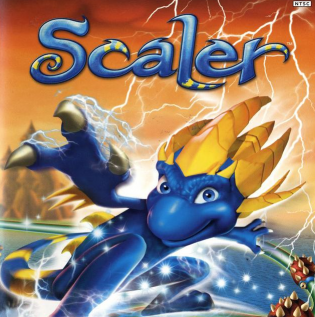 Scaler: The Shapeshifting Chameleon, or simply Scaler is a 2004 Platform Game, released for the Nintendo GameCube, PlayStation 2 and Xbox.
Advertisement:

Bobby Jenkins is a kid living with his mom somewhere in suburbia. We'd call him "ordinary", but frankly, that's a lie — he's an animal activist, with an especial love of lizards. He's currently gotten himself a dose of local infamy for protesting — in slightly-less-than-honorable ways—a motion picture currently being shot in his town. Unfortunately, the director, Looger, and his henchmen don't take too kindly to Bobby's meddling. Their solution? Drag him into a basement for some torture. Electric Torture.

In the process, they also open up a gate to another world — their world, where Looger and all of his henchmen turn out to be scaly lizard-people who want to mutate Bobby's pet lizard eggs into horrible monsters! Luckily for Bobby, he's also been turned into a lizard — a cool, blue-and-yellow alter ego called Scaler, and he quickly adapts. He also manages to quickly piss off another lizard man named Leon. But Leon, at least, hates Looger as much as Scaler does, and the two form an extremely uneasy team to take down the devious director for good!