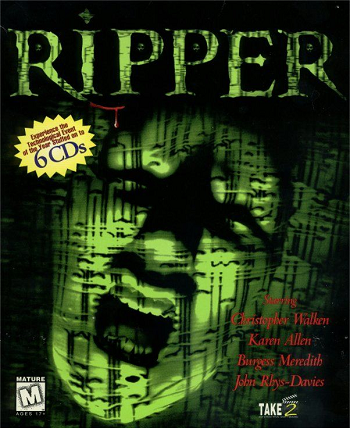 Ripper is a 1996 FMV Adventure Game developed by Take-Two Interactive.

The game is set in New York City in the Cyberpunk-ish future of 2040 and is centered around the investigation of a serial killer known as the "Ripper", due to him having a similar MO to the original Jack the Ripper. The player controls Jake Quinlan, a reporter investigating the killings who periodically receives messages from the Ripper himself. The case turns personal when Quinlan's girlfriend Catherine Powell is attacked by the Ripper for getting too close. Unexpectedly, she survives but falls into a deep coma. It is up to Quinlan to discover the Ripper's identity, even if it means butting heads with Cowboy Cop Detective Vincent Magnotta.

, and Retsupurae's MST of it can be found here