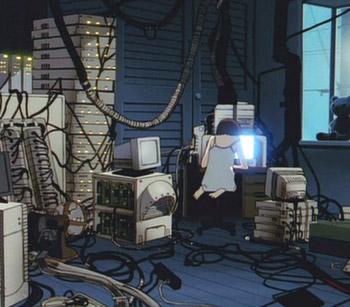 Guess what's the most advanced piece of hardware in this room. The answer may surprise you.note It’s the girl.
Trestkon: You're still the resident hacker, eh?
Evil Invasion: I'm a programmer, I just hack when I need to.
Trestkon: I think this is the first office of a programmer I've ever visited without expensive hardware lying around on the floor among pizza boxes and empty cans of pop.
Evil Invasion: Sorry, but I just moved in. Give me a few days then this place will live up to all your prejudices.
— The Nameless Mod
Advertisement:

The Big Bad is a Computer-Destroying Techwhiz. The Good Guy's on the other side. Now, how do you show the audience that they are awesome, other than having them grab a keyboard, punch a few buttons, and blow up a satellite in 15 minutes?

Throw in the 21st-century equivalent of the Mad Scientist Laboratory, and have them live in a room packed to the brim full of technological things, that's what. A Hacker Cave, known in chanspeak as a 'battlestation'.

Note that said definition of "awesome" must include one of the following words in its description (amongst others): Geeky, Technology, Things that go BEEP, Metallic, futuristic, pipes, blinkenlights

, Billions of Buttons. Anime figurines and other otaku paraphernalia does apply. Must include more than one obvious computer tower (because the hacker knows computers don't equal monitors), and the primary computer comes with at least 3 monitors (never mind some of those monitors display only a looping picture that does nothing). May also include a retro coin-op arcade game (Pac-Man and Space Invaders are obvious favorites) in a corner, just because.

"Real" hackers spend most of their hacking time peering at a text editor and thinking very hard, so one might think this unrealistic, but it still manages to be Truth in Television for many. A common cause is the need to keep any number of test machines on hand to verify programs' behavior on dissimilar platforms, or in complex networked setups. Demoparties and other hackish social occasions often resemble this trope too—as do the bedrooms (or basements) of hackers who deliberately seek this trope as an ideal!

Quite often, this trope will intersect with Voice with an Internet Connection.