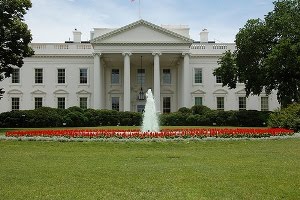 The White House is the home of the U.S. President, invisible or otherwise, and the headquarters of the Government Conspiracy. It's heavily guarded by men in black. A Government Procedural may call it home. Scary Dogmatic Aliens may destroy it with their Wave-Motion Gun; friendly aliens and monsters will land on the lawn and ask to speak to the being in charge. Our Hero may be called to The White House to be recruited for a top-secret mission, or to be decorated for preventing The End of the World as We Know It.

The building itself is nice-looking, and fairly big—big and nice enough to qualify as a Big Fancy House—but not incredibly so; it's certainly a lot smaller than the literal palaces that most heads of state around the world live in. It's also smaller than most of the private residences of the American rich, although it wasn't at the time it was built: Thomas Jefferson said at the time he moved in that it was "big enough for two emperors, one pope, and the grand lama in the bargain;" he then proceeded to conduct the first significant expansion of the residence, building two colonnadesnote Of his own design, because Renaissance Man that he was, he was a great architect on each side of the building (to hide the stables and laundry from public view; today they connect the central Executive Residence to the East and West Wings). The grandeur in American government architecture was saved for the Capitol, home of Congressnote construction codes prohibit any building from being built that would be taller than the Capitol (details

); the Heights of Buildings Act of 1910 restricts new building heights to no more than 20 feet (6.1 m) greater than the width of the adjacent street. Ironically, the Capitol is currently too small for Congress' needs; there hasn't been enough office space for Members of Congress since forever, and one of the objections to a proposed expansion of the House of Representatives—which is recommended by many reformers—is that the House Chamber would need to be extensively (and expensively) remodeled in order to fit all the new reps.; the Supreme Court didn't even get its own building until 1935 (before, it shunted about various rooms in the Capitol). You can see what the founders of this country were going for...

The White House, being in Downtown Washington, DCnote Indeed, it defines Downtown, which is usually considered to be anything within 5-6 blocks of the White House north of the National Mall is served quite heavily by the Washington Metro, with several stations nearby. The closest are McPherson Square and Farragut West on the Blue and Orange Lines and Metro Center on the Blue, Orange, and Red Lines.

On British Telly, Whitehall (or sometimes 10 Downing Street) is the Establishing Shot equivalent of The White House, and the P.M. speaks to the Invisible President by trunk call. The Korean equivalent, the Blue House, will show up occasionally in k-dramas with political themes (or as a coveted invitation).