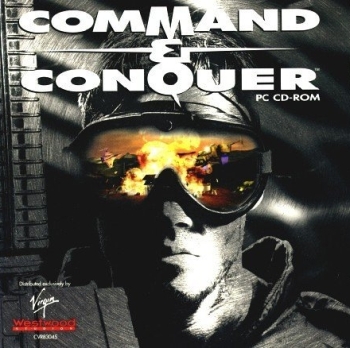 World Domination in a box
We are going to have to act, if we want to live in a different world.
— "Act on Instinct

The first game in the greater Command & Conquer series, and the originator of one of its two storylines, Tiberian Dawn was released in 1995 by Westwood Studios and originally known simply as Command & Conquer, before later being given its subtitle. Set 20 Minutes into the Future, it is a Real-Time Strategy game with a smattering of sci-fi elements such as alien crystals, stealth technology, and orbital lasers. A terrorist organization operating from various Third World nations known as the Brotherhood of Nod harnesses the power of Tiberium to challenge the rest of the world on equal footing, under the leadership of the charismatic and enigmatic Kane. The UN-backed Global Defense Initiative, a military coalition dedicated to restoring order and containing the spread of Tiberium, manages to hold the line and defeat Nod, killing Kane in the process. The game was followed by a plot-free expansion pack, The Covert Operations, a multiplayer-only sequel named Sole Survivor, and Renegade, an FPS set during the final days of the conflict from this game that boasts an active modding community and a small but dedicated fanbase.

In late 2018, Electronic Arts, current owner of the C&C franchise, announced they were working with Petrogylph Games, a studio formed by Westwood Studios veterans, to remaster Tiberian Dawn, alongside a remaster of Red Alert. Both games were released as the Command & Conquer Remastered Collection on June 5, 2020, nearly 25 years after the release of Tiberian Dawn.

EA declared the game freeware in 2007, and can be downloaded freely from CNCNet

, an open-source Fan Remake of this game, Red Alert, and Dune 2000 that rebalances and modernises the game, adding in features from later Command & Conquer games.

Shortly before the release of the Remastered Collection, EA released the source code for this game and Red Alert under GPL 3.0.

Please note that this page is for tropes that feature in this game and its expansion only. Please add tropes relating to other games as well on the main Tiberian series page.

No title the first time

For the original versions of Command and Conquer: Tiberian Dawn, the game skips the title and main menu the first time. Then it has the player select the GDI or Nod campaign.

No title the first time

For the original versions of Command and Conquer: Tiberian Dawn, the game skips the title and main menu the first time. Then it has the player select the GDI or Nod campaign.