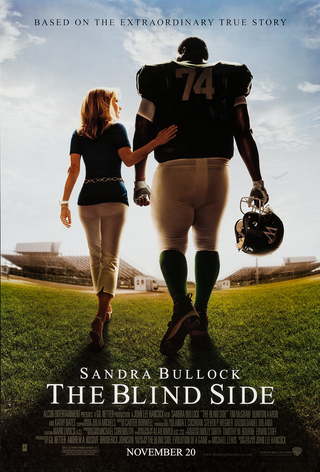 "'Stonewall' Jackson assures his Black cook that the South will free him, and the cook looks cautiously optimistic. If World War II were handled this way, there'd be hell to pay."
— Roger Ebert on Gods and Generals
Advertisement:

This trope is about a plot where an ordinary white character meets an underprivileged character of color. Taking pity on the other character's plight, they selflessly volunteer themselves as the other's tutor, mentor, or caretaker to make things better.

This is a sister trope to Magical Negro but is not a direct inversion of it. While a Magical Negro is depicted as a supporting character to the protagonist, the rescuer is the protagonist in a White Man's Burden story. The white character is the one who gets all the Character Development while the minority character's main purpose will be to advance that character development. The focus of this plot will be on the white character's saintliness rather than the minority character's journey. And while many Magic Negros are depicted with supernatural or otherworldly abilities, the Samaritan in a White Man's Burden story will almost always be an ordinary person, to make it easier for the audience to identify with.

White Man's Burden movies are frequently created as Oscar Bait. Can easily induce Narm, Glurge, Sweetness Aversion, and/or Anvilicious in the hands of a poor creator. Save Our Students plots frequently involve this trope. It can also involve White Guilt, especially if the person is helping out of a desire to not be Mistaken for Racist. In general, there tends to be a barely-hidden subtext of Condescending Compassion.

The origins of this trope go back to the days when white people set about conquering non-white people and eliminating their culture under the pretext of helping them. This comes from the Trope Namer, Rudyard Kipling's poem "White Man's Burden," which is generally read as a justification for Western imperialism, but was intended by Kipling to remind America to leave the Philippines (which it had just won from Spain) a better place than it found it, with no expectation of profiting from it and without any fantasies or pretenses that they are doing it for freedom. Rather Kipling insists you must take your duty with monk-like commitment and better the lives of people who will hate you and continue to hate you because they simply cannot know better. Sometimes the white people have genuinely good intentions, but more deconstructive works will portray them as having ulterior motives, such as conquest and exploitation. And even when they don't have ulterior motives, they are often ethnocentric, thinking more about what would make white people happy (as if the natives are white, or could potentially be) rather than what constitutes happiness in the native culture (not to mention rarely asking whether the people being "helped" want it).

Compare and contrast with Mighty Whitey, where a white person joins a foreign culture and soon becomes the most proficient member in it. The main difference is that Mighty Whitey characters join the culture of color, while White Man's Burden characters pull a person of color out of their native culture. Also contrast with Angry White Man, who resents non-Europeans - and often subconsciously believes himself to be inferior to them - rather than pitying them. Then there's Feeling Oppressed by Their Existence, which is when the people themselves are a burden to the white man.

See Good Samaritan for this trope minus the unfortunate racial implications.

In Real Life, this trope is called the civilizing mission

, which had its origins in the Middle Ages, making it Older Than Steam.

This trope has (mostly) not much to do with the 1995 film White Man's Burden.