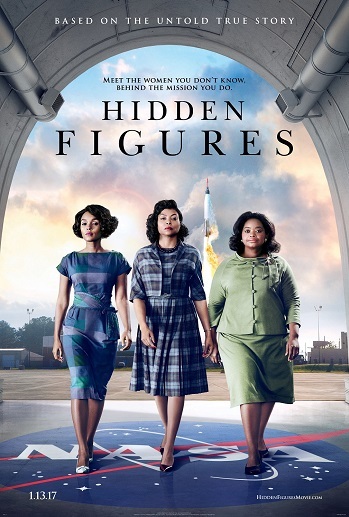 Meet the computers of 1961.
Karl Zielinski: Let me ask you, if you were a white male, would you wish to be an engineer?
Mary Jackson: I wouldn't have to. I'd already be one.
Advertisement:

Hidden Figures is a 2016 biographical comedy-drama film directed by Theodore Melfi and written by Melfi and Allison Schroeder, based on the nonfiction book of the same name by Margot Lee Shetterly. The film stars Taraji P. Henson as Katherine Johnson, the African-American mathematician who calculated flight trajectories for Project Mercury and the 1969 Apollo 11 flight to the Moon. The film also features Octavia Spencer, Janelle Monáe, Kevin Costner, Kirsten Dunst, Jim Parsons, Glen Powell and Mahershala Ali.

The film recounts the story of the African-American mathematician Katherine Johnson and her two colleagues, Dorothy Vaughan and Mary Jackson, who, while working in the segregated West Area Computers division of Langley Research Center, helped NASA catch up in the Space Race. Using their calculations, John Glenn became the first American astronaut to make a complete orbit of the Earth.