Losing a Shoe in the Struggle 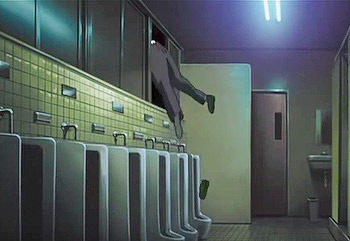 There's a reason why it's called the left shoe.
"Where is my goddamn shoe?!"
— Hannibal Chau, Pacific Rim

It doesn't have to be a shoe. It could be a hat, a pair of glasses or any kind of small article of clothing. Even getting hair mussed up for a character whose hair is normally well-kept is a visual reminder of danger. Anything that's G-rated, but noticeable. A missing shoe is certainly noticeable, and even a missing hat on a character who's known for always wearing one gets the point across visually.

Sometimes losing a shoe is done in comedic situations, such as having one fly out of a Big Ball of Violence. Bonus points if it clocks an innocent bystander.

This trope is often Truth in Television — in periods of high activity or drastic changes in motion, including when a person is thrown off their feet, light and loose articles of clothing (including shoes) are likely to fly off.

In more serious situations, the character's now-bare foot is shown to be a vulnerability which can become a Broken Heel (not literally — probably) if the writer needs to hamper his/her ability to run. This can lead to or be accompanied by Agony of the Feet (for instance, if a person steps into a bear trap or onto a sharp object with an unprotected foot; in contrast, the person injures his/her foot with the shoe still on and is forced to remove and discard it due to the injury). If they are high up on a structure, it can be used to show how far the ground is.

Compare Hat Damage, which is when an unimportant article of clothing takes damage but remains with the person. Also compare Stripping Snag, which is when a piece of clothing gets removed by something holding it back, and Giving Them the Strip, where a character intentionally removes a piece of their clothing (usually something like a jacket) in order to escape. In some cases, may lead to The Girl Who Fits This Slipper, when a character uses the missing clothing article to try to identify whoever lost it. Also compare Close-Call Haircut for when the superficial injury happens to the person, rather than their clothes.

Related to Spit Out a Shoe where someone or something eats a character whole and spits out their footwear or other article of clothing.

The girls fight over a WOOHP gadget.

The girls fight over a WOOHP gadget.