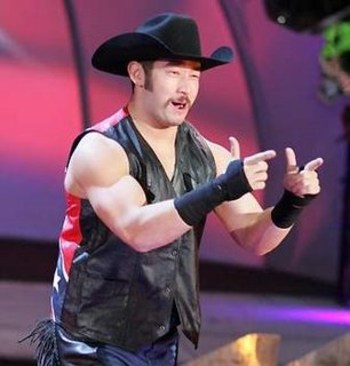 "I ain't no foreigner... ain't nothing yeller 'bout me, but there is one color about me. It's a little red... that's right, I'm a redneck."
Advertisement:

Much like the very tropes described on this site, Ethnic and National Stereotypes are things that an audience reasonably expects (for reasons good and... not so good) when confronted by an individual of a given background.

Some writers know this, and just like the tropes associated with fiction, they decide to turn it on its head.

A Stereotype Flip occurs when an individual does something that runs in direct contradiction to some established stereotype based on that character’s gender, race, religious belief, nationality, or country (or planet) of origin.

This is often Truth in Television, as none ever fit all the given stereotypes associated with their background. If enough individuals do a Stereotype Flip, the stereotype in question may become a Discredited Trope.

A Stereotype Flip is not always a good move, however; it can sprout Unfortunate Implications of its own. Inverting a negative stereotype can lead to Flawless Token, and inverting a "model minority" stereotype is risky because portraying a minority as dumb, cowardly, and/or evil taps into much more basic forms of xenophobia than portraying them as being smart but nerdy. Finally, even if both those pitfalls are avoided, it still must be remembered that flipping a stereotype isn't the same as avoiding it; flipped stereotypes are no substitute for actual well-rounded characters.

Applies to fictional backgrounds as well. If the character is deliberately defying the "nature" of his people, it overlaps with My Species Doth Protest Too Much. If they choose a culturally disfavored role knowingly, then Klingon Scientists Get No Respect. Related to Square Race, Round Class and Token Heroic Orc. Cultural Rebel is generally the product of a character given the Stereotype Flip treatment. Masculine Girl, Feminine Boy and Asian Airhead are subtropes of this. See also Power Stereotype Flip, for when their personality contrasts with their powers. May be a result of Stop Being Stereotypical.