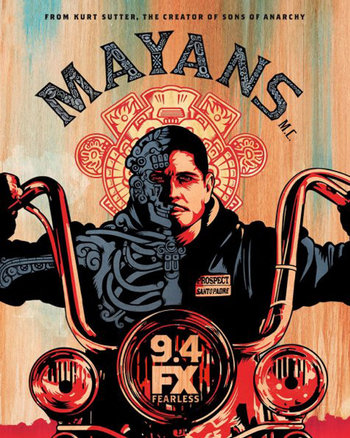 “I am a wolf, a wild cur, cut from the pack, with blood on my fur, every howl marks the debt, ‘cause a beaten wolf, never forgets”
“Being a prospect is about destroying the ego. Learning to exist for the greater good of the group. There’s freedom in that. Giving up your own wants and desires for the benefit of something greater than yourself.”
— Ezekiel 'EZ' Reyes
Advertisement:

Mayans M.C. is a television drama series from the FX network; it's a spin-off from Sons of Anarchy, taking place two years after the events of the finale. Created by Kurt Sutter and Elgin James, Mayans M.C. revolves around the titular Mayans Motorcycle Club, the "frenemies" of the Sons of Anarchy. It tells the story of Ezekiel "EZ" Reyes, a prospect in the Mayan charter on the California/Mexico border. EZ is the gifted son of a proud Latino family, whose American dream was snuffed out by cartel violence. Now, his need for vengeance drives him toward a life he never intended and can never escape.