Series / Queen of the South 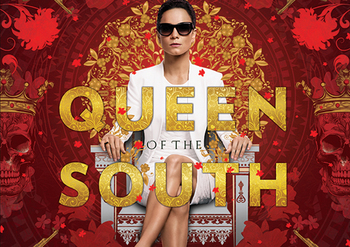 Queen of the South is a drama airing on USA Network. It recounts the story of Teresa Mendoza (Alice Braga), a young woman who starts off as a moneychanger in Mexico before events propel her into drug-trafficking in America, where she eventually rises to become the "Queenpin".

The show is an American remake of the telenovela La reina del sur, which is an adaptation of a novel by Arturo Pérez-Reverte.

Queen Of The South contains examples of: