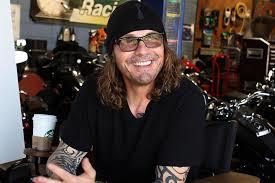 When did Otto get out of prison?!
Advertisement:

Pardon me, but are you a fan of Shakespeare? Do you have a penchant for watching acclaimed crime shows that are centered around or inspired by Shakespearean narratives and themes? Well, let us introduce you to Kurt Leon Sutter (born May 5, 1960 in Rahway, New Jersey), an American screenwriter, director, producer, and actor for such shows. He was one of the chief creative forces behind the show as he produced, wrote, and directed many episodes on The Shield, and also appeared on the show as Armenian mobster Margos Dezerian in its earlier seasons. Sutter also created the outlaw motorcycle club serial drama known as Sons of Anarchy on FX; he wrote, produced, and directed the series, as well as playing fan favorite and jailed club member Otto Delaney. He also co-created the Sons of Anarchy spinoff Mayans M.C., which premiered in 2018, serving as its show-runner until his dismissal in October 2019 due to "inappropriate behavior" backstage (though, at that point, he handed the reins to the series over to co-creator Elgin James).

He is married to actress and singer Katey Sagal, who played Gemma Teller Morrow in Sons of Anarchy.

Tropes common to Sutter and his works include: