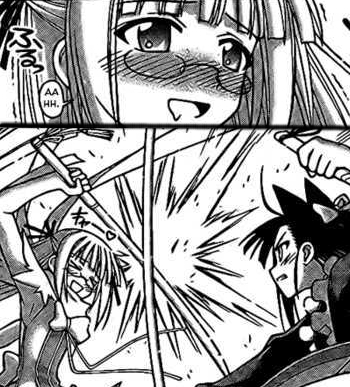 She's really... enjoying herself...
"I start hitting him and I think 'Jeez! He's breathing funny! Does he have asthma?'"
— Laurie Juspeczyk, Watchmen
Advertisement:

Sometimes, when a combat scene becomes a bit too vocal and noisy... it stops being fighting. But sometimes, for some characters, the fighting itself actually does become a sexual turn-on. The character's heavy breathing, grunts, and groans are caused by the fact that they are really, truly — and literally — getting off on the violence (though not necessarily on actual injury to themselves and / or their opponents).

is the proper term for the real-life fetish.

Related to Cat Fight (and the possible cause of the ensuing Fanservice, In Love with Your Carnage and Foe Romance Subtext). Often involves characters who are Too Kinky to Torture. Can end in Destructo-Nookie. May also overlap with Pain Mistaken for Sex. Compare I Didn't Mean to Turn You On. A subtrope of the similarly-named Interplay of Sex and Violence.