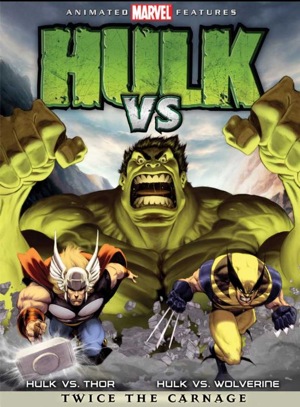 Hulk Vs. (2009) is a Direct to Video animated film from Marvel Animation and Lionsgate, featuring The Incredible Hulk two short film battles, one against Wolverine, the other against The Mighty Thor. Madhouse produced the animation for both shorts with South Korean subsidiaries DR Movie and Moi Animation.

In Hulk vs. Thor, Bruce Banner (Bryce Johnson) is abducted by Loki (Graham McTavish) and brought to Asgard with the help of the Enchantress (Kari Wahlgren). Loki angers Banner to induce the Hulk transformation, at which time the Enchantress magically separates the Hulk (Fred Tatasciore) from Banner, giving Loki control over the Hulk. With his newfound pawn, Loki charges the gates of Asgard to try to claim Odin's realm during the week when he is resting. Only Thor (Matthew Wolf) has a chance of stopping him...

In the segment Hulk vs. Wolverine, Department H sends Wolverine (Steve Blum) to hunt down a mysterious beast known by the US Military as the Hulk, who is rampaging across the Canadian wilderness. Tracking the beast by a distinctive toxic scent left at the wreckage of a small town, Wolverine soon finds Bruce Banner sitting and crying at the edge of a small lake. Noticing the same toxic scent clinging to Banner, Wolverine starts to violently interrogate him, ignoring Banner's warnings until... oops. Hello, Hulk. And this is only the beginning of Wolverine's problems.

Both segments contain examples of:

The "Wolverine" segment provides examples of:

The "Thor" segment provides examples of: