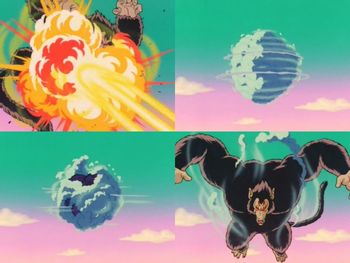 Oooh, look at that, a monkey!
"Keleze, K-matic, prepare for explosion. When the smoke clears you can find me in the midst. You had a wish? You never smashed like this!"
— King Keleze, Overtime
Advertisement:

Either a Macross Missile Massacre, a plethora of Ki Manipulation, or The Worf Barrage are sent towards the enemy. This results in a cloud of smoke or dust obscuring the opponent.

Almost always accompanied by Don't Celebrate Just Yet. If those attacking really want to doom themselves, they can make comments to the effect of "No One Could Survive That!!" If the attacker is a villain, they usually start a very lengthy Evil Gloating before bothering to check if their attack even hit the target.

The cloud dissipates; and either the enemy is revealed without a scratch (often surrounded by a Beehive Barrier), or they're not there anymore, having jumped into the sky when nobody was looking, and are quickly descending upon the attacker's head. Expect this trope to be accompanied by a pause in the music during the smoke formation, after which it either doesn't resume if the enemy escaped, or come back on loudly, usually with liberal doses of bass instruments, if he survives.

Rapidly becoming a Dead Horse Trope in modern cartoons; it usually can be anticipated the moment you see smoke.

See Out of the Inferno for the even more badass version.

Dirt Forcefield sounds similar, but is a completely different trope. Same goes for Smoke Out.

Alternative Title(s): No One Could Survive That Much Dust