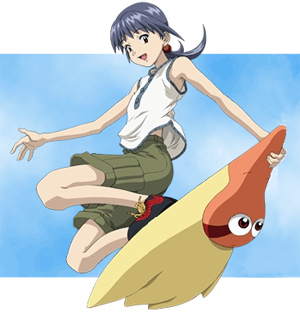 "When you don't fit in anywhere in the world, what should you do? Carve yourself to fit the world...? ...Or carve the world to fit you?!"
— Tomonori Komori
Advertisement:

Definitely not to be confused with the sequel novel to the movie Willow, which is also called Shadow Star.

Narutaru (full title Mukuro Naru Hoshi Tama Taru Ko, roughly "Corpse of a Star; a Precious Child"), published in the United States as Shadow Star, is a manga and anime series with a very deceptive premise. It looks cute, with a perky Naïve Everygirl lead (who transforms into an Action Girl as the plot progresses, though in a most plausible manner) who happens across an adorable star-shaped Mon while visiting her grandparents during summer vacation. The anime opens with the most upbeat theme music imaginable and has a relaxed first episode. Things go downhill from there.

The story is told from the viewpoint of twelve-year-old Shiina Tamai, after she acquires the aforementioned dragonet, which she names Hoshimaru. Merely being in this creature's company inevitably draws other young people with dragonets to her. Shiina, unlike the others, is not telepathically linked to her dragonet, and Hoshimaru seems to have a will and personality of his own; meanwhile, not all of the other "dragon bearers" have good intentions, for Shiina or the world at large. While the anime is open-ended to say the least, the manga leads towards an almost Gainax-type ending. Unfortunately, the official English release of the manga was not only flipped and censored, but also incomplete. This leaves English viewers no way to officially experience the half of the story that the anime didn't get to, although some unofficial complete translations do exist.

Shadow Star was created by Mohiro Kitoh, who also created the Humongous Mecha series Bokurano; the manga ran in the seinen magazine Monthly Afternoon from 1998 to 2003. A 13-episode anime adaptation aired in 2003, directed by Toshiaki Iino and written by Chiaki Konaka, writer of Serial Experiments Lain and Digimon Tamers. Considering Konaka's resume, he was certainly a perfect match.