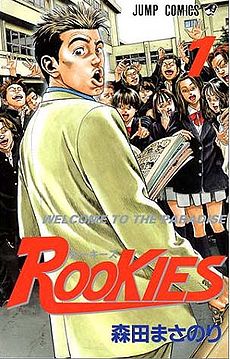 Our hero and his class.
Advertisement:

Koichi Kawato. Young, idealistic, almost foolish Japanese literature teacher. On his first day at Futakotamagawa High School (also known by the nickname "Nikogaku"), he's assigned as the homeroom teacher of the baseball club, the toughest delinquents around. They cut class, smoke, have sex in the clubhouse, and haven't even been playing baseball for six months because of a bench brawl. Kawato decides to turn the team around and head for the Koshien, but the boys aren't having any of it. However, some of them still want to play baseball.

That's the beginning of Rookies, the second and most famous manga by Masanori Morita (who authored Rokudenashi Blues and worked as Tetsuo Hara's assistant on Fist of the North Star), which was serialized in Weekly Shonen Jump from 1998 to 2003. With its realistic and detailed art and intense and well-written baseball games, Rookies is not well known in the west, but a classic in Japan and translated into several languages. It was adapted into a successful J-Drama in 2008.