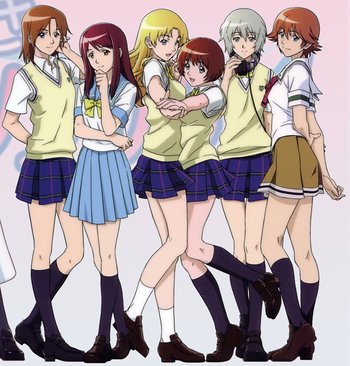 And the American is...?note The blonde one, obviously.
"I JUST REALIZED SOMETHING! [...] I AM THE ONLY CHARACTER IN THIS SHOW WHO LOOKS REMOTELY JAPANESE! THANK YOU!"
— Kyon, You Got HaruhiRolled!
Advertisement:

Mukokuseki (jp: 無国籍) is the deliberate lack of ethnic features included in the character design of Japanese fictional characters. It literally means "stateless" (i.e. "without nationality"), though the term relates to more abstract anime, and in this case, used hyperbolically.

Note that just because you perceive someone as being a particular ethnicity despite Word of God saying otherwise doesn't mean it is this trope. The trope appears when characters of the same race look completely different, or characters of different races look essentially the same. It's the ambiguity that arises when there is a lack of Facial Profiling.

Look at the picture to the right. Are the characters all different ethnicities, and if so what are they? Are they all the same ethnicity, and if so which is it?

It can cause some other problems with a Live-Action Adaptation... do you cast a character based on canon ethnicity or just someone who fits in the subjective range of ethnic vagueness of the drawing? Or whatever is the majority for the assumed audience regardless?

People (rightly or wrongly) typically fall back on one of two explanations for this trope.

The first is that the purpose of mukokuseki is to make characters look distinct so that the audience, and the artists don't get confused. In works set in the largely homogeneous Japan, it can be hard for an animator to make unique designs in such a simple art style for several dozen straight black-haired, brown-eyed people.

The second is the idea that the artists are appropriating features from the exotic "other" (in this case white people) into their character designs either for their own interests or for marketing purposes. This misguided idea relies on the premise that white people look like anime characters, despite the fact that ethnic Caucasian facial features tend to be on the opposite end of the spectrum of features used in most anime art styles. It is speculated that the pervasiveness of these physical characteristics in Japanese pop-culture are the result of Western influences. Eurocentric beauty standards have infiltrated most cultures over the centuries via Western colonialism and soft power. The Portuguese missionary Luis Frois, who stayed in Japan for more than 30 years during the Warring States period, said, "Europeans say big eyes are beautiful. The Japanese consider it horrifying and make it beautiful to have the eyes closed." This describes how the Japanese at that time idealized the smaller eyes as depicted in picture scrolls and bijin-ga, rather than big eyes which are a dominant beauty standard in Japan today. However, those who hold this view tend to ignore the fact that most anime characters lack characteristic ethnic Caucasian features, such as large prominent noses or protruding brow ridges and deep-set eyes. Ironically, these features are pretty much the opposite end of the spectrum of how most anime art styles are drawn. This is caused by the fact that people born in Western societies tend to view ethnic Caucasian features as "default" or "featureless", so when they see unrealistic depictions of humans they subconciously assume the depiction "looks white" unless there's specific racial stereotypes attached.

There exists a fetishization for half European/half Japanese people. Japanese fiction utilizes the But Not Too Foreign trope quite heavily when it comes to Japanese/white mixes — who are by far the most represented group of hāfu (half-Japanese people) in Japanese media. White hāfu, and Japanese people with some amount of white ancestry in general, are stereotyped to be classy, beautiful, multilingual, but also not truly a part of Japanese culture. Non-white Japanese mixes are sometimes called "zannen hāfu" or "disappointing half-Japanese", and endure much more discrimination than white hāfu.

Westerners in anime and manga are sometimes subject to Facial Profiling. This usually comes in the form of giving them large noses, generally prominent facial topography and other physical stereotypes. This is rooted in the image that Japanese, most Asian and other non Caucasian groups (for example, native Americans) have of European physical features. This is more common in manga, anime, and Japanese video games that have a more realistic/serious setting where the fact that a character is Western is relevant to the story. Most Japanese artists will avoid doing this if they can, though, since these features blend in poorly with the majority of Japanese art styles and can reduce the appeal to the target audience (otaku). In these cases, the character may be assumed to be Western based on context but their physical features are given the Mukokuseki treatment.

Although Mukokuseki is applied to Japanese characters, Chinese and Korean people in manga, anime, and Japanese video games are sometimes still given Facial Profiling (although not as often as white Westerners are). This is rooted in how imperial Japanese propagandists generally depicted themselves as fair skinned and wide eyed in contrast to the Chinese and Koreans, who were depicted with smaller eyes and stereotypical yellow skin. This artistic racialization was done by the Japanese to distance themselves from the rest of the Asian continent, particularly other East Asians, whom they viewed as inferior to them, and to put themselves on the same level as the West (white people). Modern depictions of Chinese and Korean people usually aren't as unabashedly racist as they were during World War II but many racist stereotypes do persist. See Anime Chinese People and Koreans in Japan for more information about the depictions of these nationalities in Japanese media.

A Trope Codifier for this was Sailor Moon, the cast of which grows quite large over the course of the series (although this trope was pervasive before Sailor Moon). Despite a majority of the characters being 100% Japanese, they have every hair and eye color possible — and even some that aren't. A point of contention is that the main character has yellow hair and blue eyes, making her look "white". Taking into account that her mother has blue hair and her daughter has pink hair, it's clear the color isn't meant to indicate any race. In the live-action adaptation, the wild colors were part of the main cast's transformations, but, in their civilian personas, they had black or brown hair. SM's influence on Japanese pop culture helped to spread the look and it now pervades all media (anime, manga, advertising, video games etc).

On the other end of the spectrum from the Sailor Moon example, the creator of Naruto, Masashi Kishimoto, went on record saying he was happy Naruto was designed with blond spikey hair because after the series went international it made the character more relatable to Western audiences, and even stated that "Naruto has blue eyes and blonde hair, so any child actor in America could play him" in a live-action adaptation (although his perspective comes from the Japanese stereotype that most Americans are blond-haired and blue-eyed white people).

Regardless of what they look like, assume that the character's race matches the original primary audience unless it's heavily implied (through setting, culture, costume, or Word of God) to be otherwise. That's true of all media that doesn't use Facial Profiling — Eastern or Western, even literature where you have to use your own imagination. But it can really be either explanation, or both. Without Word of God, it can be hard to tell, which is why some people unfamiliar with the concept come to the conclusion that Japanese people have a rather skewed sense of self-perception.

Arguably started by Osamu Tezuka, whose art style was heavily influenced by the works of Walt Disney, Max and Dave Fleischer, and other American cartoonists, though the big anime eye trope was established decades before Osamu Tezuka. Also, Big Anime Eyes still differ in style from American creations such as Big Disney Eyes and Big Looney Tune Eyes; mainly, the former aren't as unrealistically circular. That's part of the reason you don't confuse Red Hot Riding Hood or the Disney Princesses for anime characters, or even Rapunzel.

In part, this trope has to do with the Default Human Being concept

. Without obvious ethnic or gendered features, the audience will assume the character defaults to their culture's idea of the common human. This can be seen in the West with the featureless stick-figure depicting humanity as a whole and indicating white men specifically at once. Just as American animators will give Asian distinct features to indicate they're different from the European default, Japanese animators will often give European-descended characters distinct facial features to make them different from the Japanese default, even if both defaults are functionally identical.

Compare Ambiguously Brown (when someone has a noticeably different look from the rest of the main cast, but still no distinct giveaways or confirmed ethnicity), Only Six Faces (where there is little difference at all in character designs), and Humans Are White ("stateless" of course means skin ranging from pale to peachy). See also Implausible Hair Color, Big Anime Eyes, and People of Hair Color.

Exceptions to this trope:

Discussions of this trope