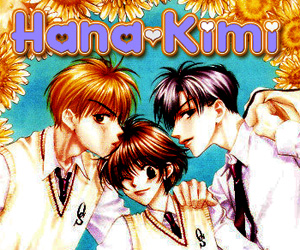 Hana-Kimi, short for Hanazakari no Kimitachi e ("For All of You in Full Blossom"), is a shoujo manga by Hisaya Nakajo. It was serialized in Hana to Yume from 1996 to 2004, and compiled into 23 volumes.

Mizuki Ashiya, a Japanese girl who is living in the United States, develops a interest in track and field athlete Izumi Sano after seeing him on television. She becomes so infatuated that she decides she will go back to Japan and attend the same school as he does, just to meet him and become his friend. She is so determined that she doesn't care that the private boarding school Sano goes is an all-male one.

We all know where this is going.

Mizuki enters, and luck is with her: she is not only assigned to the same class as Sano, she becomes his roommate! Unfortunately, she soon discovers that Sano has abandoned the field after developing a lesion, and his athletic career has become a touchy issue.

She is soon discovered, first by the gay school doctor (but he agrees to maintain her secret), and then by Sano himself. Fortunately, she doesn't notice this last, and Sano decides to maintain and protect her secret until he discovers her real intentions or she tells him directly. That turns to be the best decision, since she isn't very good maintaining the Bifauxnen facade, and the rest of the students are victims of a Somebody Else's Problem field mixed with Clark Kenting.

Soon, Mizuki is slowly involved in the school customs and the little intrigues between her classmates, while at the same time she gets involved in the difficult situations around Sano and his family, helping him to overcome his problems and return to the track.

Since this is a Shoujo manga, there are also a lot of romantic entanglements, but the most notorious is the one between Mizuki, Sano and Shuichi Nakatsu, a boy who is in love with Mizuki but ignores her real gender and wonders whether he is really gay....

There is no Animated Adaptation of the manga, but four live action adaptations under similar names, one each in Taiwan and Korea, and two in Japan, have been released.