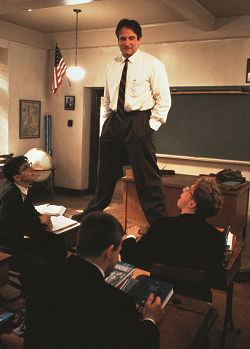 Oh, Captain, my Captain!
“I will use anything, from Beethoven to Billie Holiday to rock 'n' roll, if I think it’ll help me teach a student to love music.”
— Glenn Holland, Mr. Holland's Opus
Advertisement:

A teacher...who is cool. They motivate their students to learn (possibly in "fun ways" that actually are fun), laugh at the Stern Teacher and Misplaced Kindergarten Teacher behind their backs, protect their students from the Sadist Teacher and oppose the Evil Teacher and Dean Bitterman at every turn. Their consistently good results might protect them from being a Fired Teacher, but this isn't a given. A lot of these end up being a Mentor Archetype either way.

Often a Foil to the Apathetic Teacher.

It isn't uncommon for this character to act as a Parental Substitute if one or more students has parental issues.

Bob had trouble connecting to his students at first but wins them over by making kettle corn for them and now he's cool.

Bob had trouble connecting to his students at first but wins them over by making kettle corn for them and now he's cool.