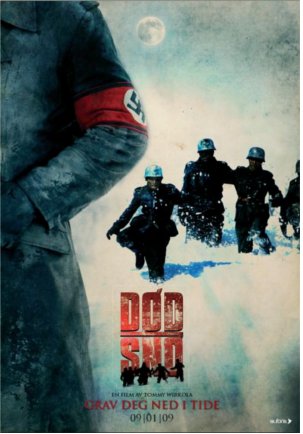 And you thought Those Wacky Nazis were bad the first time around.
Advertisement:

Dead Snow (Død Snø) is a Norwegian Zombie horror-comedy movie from 2009. The plot concerns a group of young medical students who go to a small secluded cottage in the mountains for their Easter vacation. Drunkenness, lechery and silliness ensue - until a lone wanderer comes by, telling the grisly tale of a detachment of Nazis who, in the last days of the war, stole everything not nailed down and fled to the mountains, where they perished in the cold. Of course, The Wanderer is entirely ignored, and leaves. Before long, though, the med students find themselves fighting for their lives against zombies... Nazi zombies.

Dead Snow isn't quite your typical zombie film, if that wasn't already apparent, and it switches between horror and humor much like Evil Dead 2, which appears to be an important inspiration for this tale of gore and guts.