Film / Dead Hooker in a Trunk 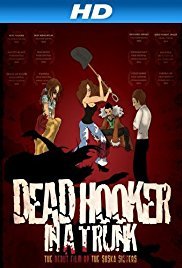 Dead Hooker in a Trunk is a 2009 Canadian Black Comedy crime film, directed by Jen and Sylvia Soska.

We follow four friends, a badass, a junkie, a geek and a goody two-shoes. While on an errand, they find a dead hooker tossed into the trunk of their car. On a quest to not be wrongfully arrested for the crime, the friends go on a quest to hide the corpse, all while the police and various unsavoury characters pursue them. Meanwhile, the hooker's killer is lurking in the shadows...