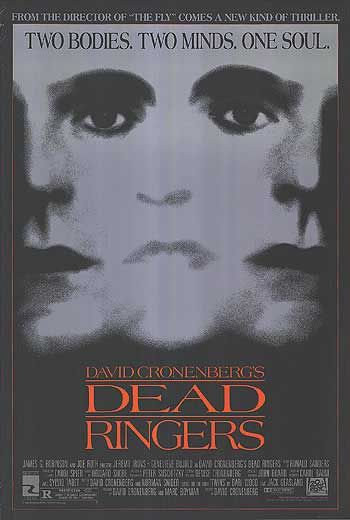 "There's nothing the matter with the instrument, it's the body. The woman's body is all wrong!"
"Separation can be a... terrifying thing."
— Dr. Beverly Mantle
Advertisement:

It's a story about twin gynecologists, Elliot and Beverly Mantle, who run a brisk business treating infertile women. That, and they have a tendency of taking advantage of them, too. Being the more suave of the two, Elliot woos them, and when he's finished he pulls the old switcheroo and pawns the unsuspecting women off onto Beverly.

Getting Elliot's sloppy seconds begins to tire Beverly, and he sets out to get a woman on his own. He makes the big personal leap of dating actress Claire Niveau (Geneviève Bujold). Unfortunately, Beverly is a jangled bundle of neuroses, and when Claire goes out of town to work on a film and Bev calls her hotel room only for a man to answer, Beverly jumps to the conclusion that she is cheating on him.

Cue descent into delusional hell, wherein Beverly begins performing unnecessary operations with custom gynecological tools on women who he believes have "mutant genitalia." When the effects of his declining mental health spill over into the brother's practice, the board of health suspends Beverly's license. Elliot, who had always been sensitive to his sibling's fragility, leaves his practice and his current sex partner to join Beverly, who has holed himself up in their apartment.

The twins then embark on a medical procedure to separate themselves for health reasons. Has it been mentioned that they aren't conjoined twins?

Not related to the British television and radio series Dead Ringers. Also not to be confused with Dead Ringer, an entirely different identical twin story starring Bette Davis.

This film operates on the following tropes: